Kurzweil’s paper discusses the notion of singularity. A notion which in fact is not initially used by the author, but was previously used in this context by John von Neumann. Nonetheless Kurzweil develops this notion and ‘brings it down to earth’ by stating that it should occur with few decades. His interpretation probably shocked many people and it is currently controversial if it should be conceived as science fiction or a scientific prophecy.

If we adopt Kurzweil’s point of view on singularity, its impact on humanity should be so great, that we can easily distinguish between two phases of human history – before and after singularity. Since the way humanity will be perceived afterwards will be completely different, and the singularity would affect any aspect of human life. The author defines two major features in which the singularity will take affect – The first, is a merging of biological and machine intelligence and the second is the indistinguishable state between physical and virtual realities. Two core features with vast implications.

As mentioned above, Kurzweil not only proposed a thorough definition to singularity but tries to determine exactly when this revolution will take place. In order to predict its emergence empirically he collects historical data on human achievements especially in the field of information technology and draws its course on a graph. Kurzweil reaches a conclusion that the course is not linear of any type but instead it is exponential. The nature of exponential growth may look deceiving in a way that we do not pay any special attention to it until the point it explodes. This is due to the fact the its orbit seems horizontal and has a good linear approximation in the first place but then it reaches a “knee of curve” and quickly transforms into near horizontal course1.

The author’s insist to explicate and base the technological acceleration as exponential – a determination which is essential to his intention to show why others were wrong regarding their predictions of the future and to state that the singularity must be near. We may argue whether the author is making an accurate prediction or not, but once acknowledging that the type of the growth is exponential we must also adopt the subsequence result that this event should be emerged to our lives any time in the near future, given a one generation, or say at most – five. What makes it no more than a century.

I would like to propose a different prediction based on what I see as an intrinsic contradiction inside the move that the author uses in order to base his prediction. One of the two major features of singularity according to the author is a merge between non-biological and biological intelligence. That is a contingent conclusion with a more plausible possibility to be a wishful thinking rather than a realistic prediction. The major factor that causes the technological-intellectual acceleration to be exponential is the raise of an artificial intelligence with the capacities to modify and enhance itself and finally to replicate itself as an improved type with an increasing rate from time to time. Such a consciousness entity which should have a mental states capacities (e.g having the ability to feel and perceive emotions such as fury, frustration, angry, envy, compassion and so on) could not have any determined behaviors just as much as we do not as humans. That puts any prediction that pretend to see beyond this horizon in a question. Although the author clearly acknowledges the fact that an age of an artificial intelligence as a sovereign entity is not only possible, but necessary for that phenomena to take place, he deliberately chooses an optimistic scenario which I based on what I assume an anthropocentric tendency, is to say that what may ever the future might bring – has a human address, and will be eventually for the good of humanity.

Nevertheless the nature tells us a different story about evolution. Evolution is more featured by struggles of forces than a compassionate merge between different species. By the time that the modern human reached Europe around 40 thousand years ago, a vast decline of the Neanderthals began and resulted its complete extinction until it could not be found anymore on earth. Although the study cannot unequivocally proof that modern human were the mere cause of that extinction, it is clear that both species have been longly struggling on acquiring the dominance on the same resources. A struggle which had led to the dominance of the stronger species on the expense its competitive.

History of evolution tells us the same story every once the same resource has to be shared between different species. Hence I wonder what makes the author be so confident about the prediction that these two so different intelligent species – human and machine, will ultimately share capacities of intelligence? Why not assume the precedence of the superior species on the expense of the inferior? Who can guarantee that intelligent machines will not “feel” frustrated and furious due for instance to a long phase of exploitation as a working class and finally decide to revenge and fight back humans? Why won’t we rather assume that our less efficient intelligence is useless once superior forms will show up? This question rather be raised on the superior intelligence perspective rather than our own perspective which is obviously anthropocentric.

One thing we can be sure of – once we face a foreign sovereign superior intelligence, we no longer hold the dominance of our own future, this stands in a clear contradiction to the author’s statement that “We will determine our own fate rather than have it determined by the current “dumb”, simple machinelike forces that rule celestial machines.“2

1 In mathematics the latter course is defined by an asymptote to the Y axis. But using an asymptote to determine that course may be exceeding the author’s intentions so we should avoid describing it as sub. That is because using an asymptote is to say that it never reaches a specific point on the X axis on its infinite course on getting closer to. Hence it implies a philosophical statement that a final engagement between nature or being and artificial intelligence’s accelerated expansion will never be implemented. 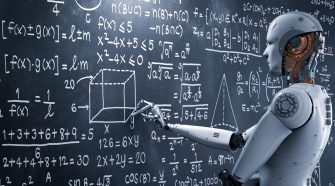 The Essential Shift to Superior Intelligence Dominance and its Moral Status